Whats up with Whatsapp? why should you really worry? its alternatives?find out here. 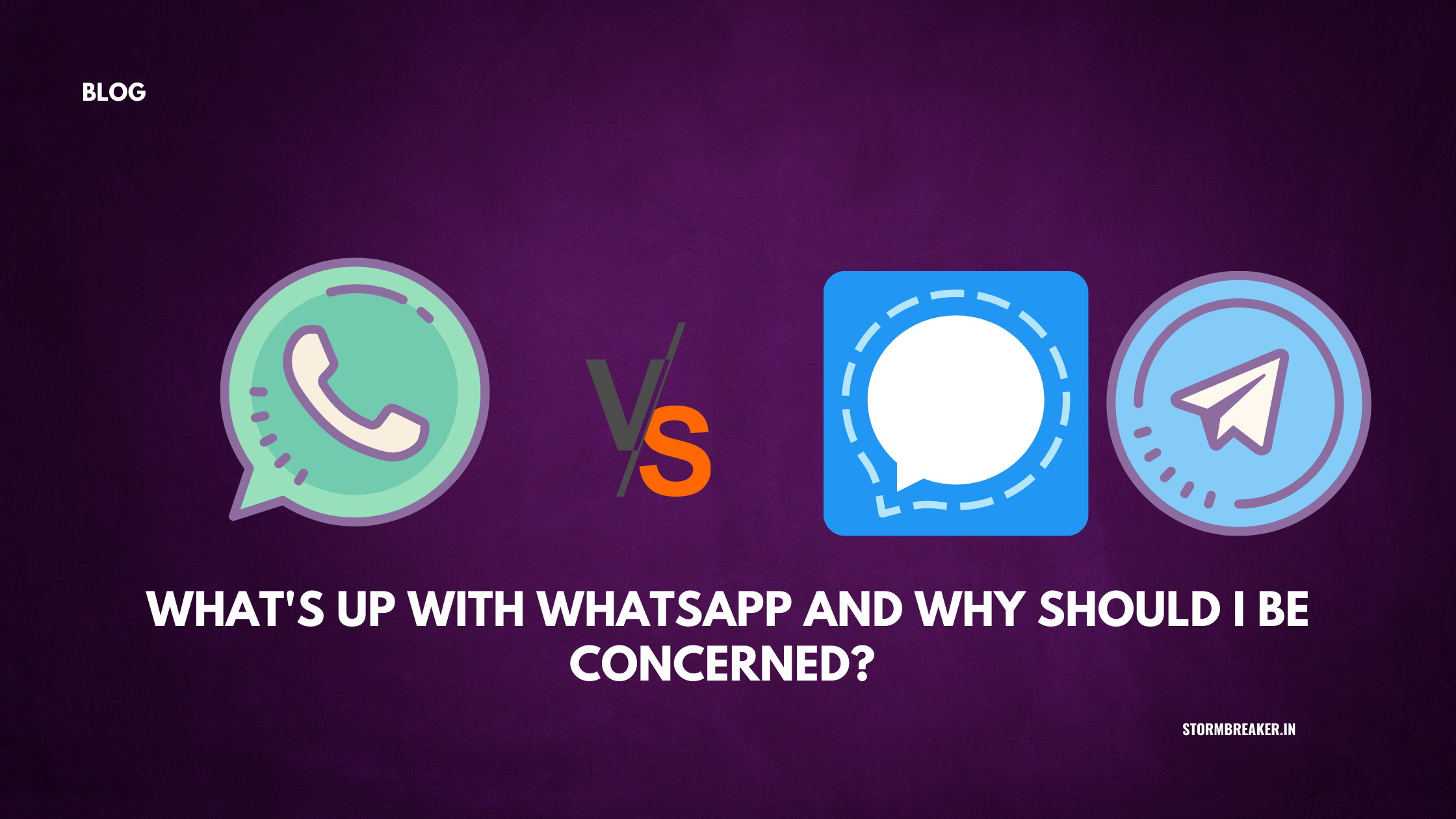 For starters, first lets check at the screenshot below. If you have not encountered the same, you might later.

Now if you have accepted this screen already, it is being considered as one of the major mistake, if not your major mistake, in recent times. The screenshot above is a pop up of the new whatsapp agreement which people all around the world have been receiving and would have to agree before 8th February if they would like to keep their account on whatsapp for use.

Well, If you don’t know about what this privacy policy caters in front of its existing users, fret not, majority of its users feel the same way. The new privacy have certain clause that has caused sleepless nights for people who are confused whether is it the time to finally make a switch from whatsapp.

Privacy, the term used in the word “privacy policy” that was catered to you via whatsapp might be in danger this time. Personal privacy to be more apt, is at stakes this time if you still want to use whatsapp as your day to day messenger. As majority of the users worldwide use whatsapp on a daily basis this move made by Facebook Inc( owner of Whatsapp) is being seen as one of the most evil move as the intentions of the company doesn’t look nice.

According to the new privacy policy, after 8th February 2021, Whatsapp users data that is present on the whatsapp servers, would be temporarily owned by Facebook. This temporary ownership of user’s data is a controversial move, as it known by everyone how Facebook earns its dollars worldwide. Facebook caters the data it has with its 3rd party partners to help them target ads based on user’s liking, purchases, location, what they share and decisions they have made on the social media.

Etc. This technique which Facebook uses is known as user profiling or Behavioral Mapping. What Facebook does is, they map users every click, every scroll, their behavioral pattern, their liking and use it by selling those data to 3rd party advertisers for bucks. hence you see those ad banners or video ads of things you just saw, liked or searched for( example, if you have been naughty, they know about it as well).

Is it really such a big issue? if it doesn’t concerns me why should i still consider this as a warning?

If you are confused or still not concerned just search for the term,”which social media company owns largest user data” and you will get your answer. try to learn what data these companies try to gather in order to cater their advertising partners to earn dollars by providing you a “free” social media.If you still think social media is free, we think you should understand by this example:

The social media platform you use is a decently curated box for 3rd party advertisers, data mining companies, Government as well as their agencies and you my dear friend, are the product.

Yup,That’s true. the social media you know today, isn’t made exactly for you but it is designed in such a way where you act as a nice polished product which the platform (Facebook, google, Snapchat etc you name it.) can sell to 3rd party advertisers and other product sellers. So, the data that they have about you is still of an unknown nature. Even after what these companies mention in their privacy policy about which data would they be eyeing on, you can never believe they would stay truthful to their words. So act now, or suffer later.

Its not about only some 3rd party companies who want your data, your own government is in this line as well.

If not whatsapp, what should i use? how can i convince others to join the bandwagon with me?

Whatsapp, currently is by far the largest used platform for message exchange in the world. with more than 4 billion messages being sent to and from daily, just imagine the amount of data the new policy unlocks for Facebook to use. Your texts, your voice note, images/videos you share, location, in short your private life can be no longer private as it could be shared with others who bid for it. latest entry to the list of this bidders are many governments around the world(yes your government too), as they want to know everything their citizen say about them, whether the citizens are praising the one’s in power or criticizing them. scary isn’t it? share this with the ones you know and this might change their mind.

Whatsapp indeed can be hard for you to leave considering most of your contacts(personal/business) might be present on it, but trust us if whatsapp is going to adopt this model, its safe to bid farewell to whatsapp. Other 2 popular alternatives to whatsapp right now in use by many people are:

Signal has been present since 2014 and let me surprise you by this, its made by co-founder of the original whatsapp messaging platform. isn’t it shocking? Signal offers its users secure messaging, voice and video calls and all communications end-to-end encrypted. With group facilities just like whatsapp you can maintain your family and friends group the same way you did on whatsapp. The messaging platform is based on privacy model hence it has some niche features like Self-destructing messages and more.

Telegram is yet another popular messaging app apart from whatsapp and its user base has been increasing ever since its launch in 2013. Created by Nikolai Durov, Pavel Durov, Axel Neff, the app offers protection to its users with its E2E encryption. The messaging platform has been popular as it offers cross-platform message sync, sharing files of size up to 2gb, 200,000 group size, animated stickers, poll creation and much more. The app offers encrypted secret chat system for one to one user.

Stay tuned for another blog for detailed overview between these three messaging platforms for you to decide, which one suits you the most.

How to protect yourself from a Scam?