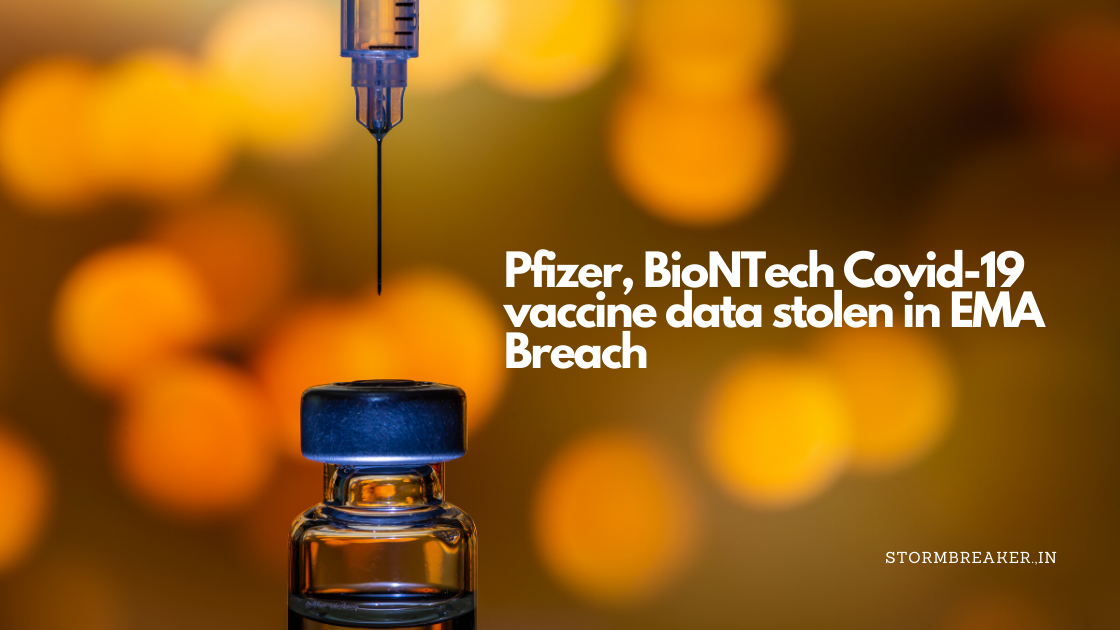 European Medicines Agency (EMA, european medicines regulator) announced that they had been “the subject of a cyberattack.” Their brief note also said,”The agency has swiftly launched a full investigation, in close co-operation with the law enforcement and other relevant entities.”Pfizer and BioNTech (german partner of Pfizer) has also confirmed that their data had been “unlawfully accessed”.

What else do we know?

The companies said that their documents related to the development of COVID-19 vaccine had been “unlawfully accessed” on EMA’s servers in a cyberattack. Pfizer and BioNTech say they did not believe any personal data of the trial participants of vaccine had been compromised. The companies also said EMA “has assured us that the cyber attack will have no impact on the timeline for its review.”

EMA has not yet given any further details about the when they were hit by the cyber attack, who could be responsible, what other information may have been compromised and has appealed to wait till the investigation undergoing completes its course. EMA, though, informed the companies pfizer and BioNTech that some documents related to COVID-19 vaccine candidate had been viewed.

What did the officials have to say?

Marc Rogers, Founder of CTI-league, said “When it comes to the data submitted to these kinds of regulatory bodies, we are talking confidential information about the vaccine and its mechanism of action, its efficiency, its risks & known possible side effects and any unique aspects such as handling guidelines.”

Pfizer and BioNTech said to reuters,”no BioNTech or Pfizer systems has been breached in connection with this incident and we are unaware that any study participants have been identified through the data being accessed.” The EMA has told that it would complete its review by dec 29.

Has such incidents occured in the past? can they be linked together?

There has been many attempts in this year where multiple companies related to development of COVID-19 vaccine faced cyber attack. There was also an incident where spies from China were caught and punished by the US DOJ. Below are the articles related to such cyber attacks this year:

What happened?According to the report of The New York Times, Hackers with the links to the Chinese government targeted Moderna Inc, a biotech company which is at the moment working on a coronavirus vaccine. This cyber attack was done on the company with the intention of stealing their valuable research data, according to a U.S…

A Singaporean pleads guilty as a Chinese agent.Stole U.S sensitive data through LinkedIn.

What happened?In this week, a Singaporean citizen, named Jun Wei Yeo, pleaded guilty to US justice department that he was actually working as an agent of Chinese Intelligence. Jun Wei Yeo was recruited by the Chinese government around 2015 when was just a PhD student in Singapore said the US Justice Department. What crimes did…

What happened? Official working with Central Health, said that they are investigating a recent cyber attack. Investigation of one of its computer servers is underway, officials said. What is Central health? Central health is a local healthcare district created in 2004 by the voters of travis county which connects with several low income residents in…

What Happened?US Department of Justice charged two Chinese nationals with serious charges which include allegedly hacking and stealing secrets from hundreds of organizations and individuals in America and other places on behalf of Beijing. They had been doing it for more than a decade. What Disclosures did the US DoJ made?What their main motive was…

National Cyber Security Centre [NCSC] has recently released a report and revealed how a hackers group named Cozy Bear (aka APT 29) has been busy in running cyber espionage campaigns targeting organizations of Canada, US and UK who has been busy in development of vaccine for corona. Along with the 14 page report released by…

As many pharma companies were in the race to develop vaccines for COVID-19 from the start of the year, so did the hackers who were targeting companies like Moderna, Novavax, Johnson & Johnson, Pfizer,BioNTech and many others in the countries like US, Canada, UK etc. so yes, these attacks can be linked together. On basis of allegations made by the victim countries, estimates were made that these cyber attackers were from North Korea, South Korea, Iran, China and Russia. Not only companies, even reputed organizations like the world health organization have also come under cyber attacks.

What should you do to prevent yourself/company from such attacks?