A Singaporean pleads guilty as a Chinese agent.Stole U.S sensitive data through LinkedIn. 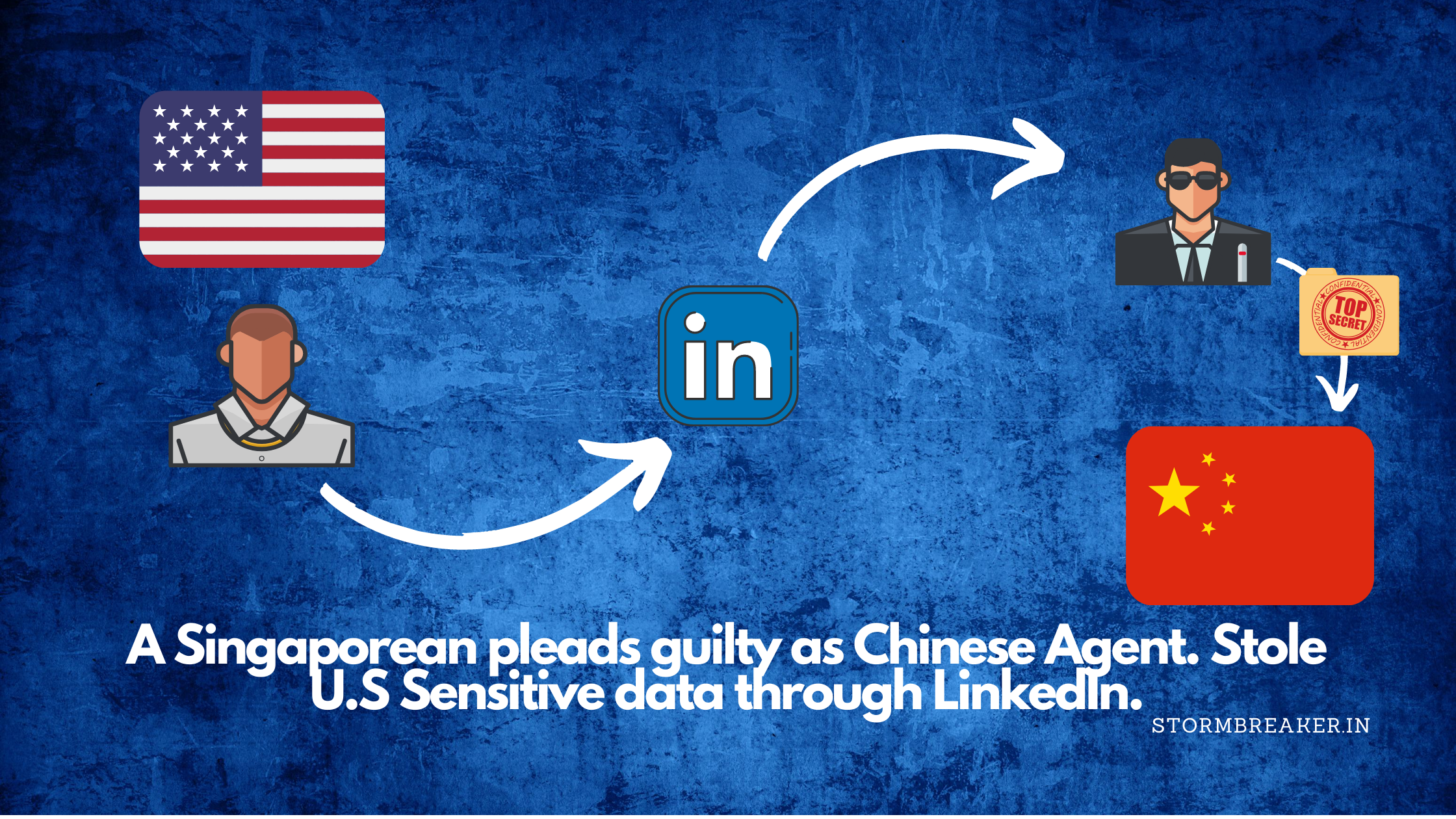 What happened?
In this week, a Singaporean citizen, named Jun Wei Yeo, pleaded guilty to US justice department that he was actually working as an agent of Chinese Intelligence. Jun Wei Yeo was recruited by the Chinese government around 2015 when was just a PhD student in Singapore said the US Justice Department.

What crimes did the agent commit?
According to the report of reuters, The Singaporean man had set up a fake consultancy website to extract information from the U.S government workers and U.S military workers as well. His task was to garner as much information as he could from both the government and military workers of U.S . As mentioned in the report of BBC, He performed this Phishing task via LinkedIn platform. It is said that Kevin Mallory a former CIA officer, who was jailed for 20 years last May was targeted on LinkedIn for disclosing military secrets to a Chinese agent. Jun may be that Chinese agent.

Who is Jun Wei Yeo?
As mentioned in the report by TheQuint, he was also known as Dickson Yeo. Jun was a PhD candidate at Singapore prestigious Lee Kuan Yew School of Public Policy(LKYSPP). In 2015 when he was in Beijing to give a presentation on the political situation in Southeast asia, He was contacted by some individuals for recruitment. Later those individuals were revealed as intelligence operatives for the Chinese government. He joined PRCIS (People’s Republic of China intelligence Service) in 2019.

What task did China wanted him to accomplish? Why did he chose LinkedIn for targeting people?
The agent was tasked to collect and provide the reports about international political economic, diplomatic relations which were are non-public information. To gather such information he chose LinkedIn as a platform to target due to its massive user database of around 700 million people. India, ranks 2nd in terms of users on LinkedIn with a staggering number of 62 million+ users.

related posts to take a glance at:

Jun then setup a website and a LinkedIn page posing as a Political risk analyst recruiting many individuals where he paid them to write reports. This report was then sent to Chinese government. This is when Jun started phishing military and government employees of U.S who were either dissatisfied with work, were going through financial crisis etc.

Are you on LinkedIn? What measures can you take to prevent yourself?
If you happen to have a profile on LinkedIn (many working individuals do have presence on it, including professionals), Then here are some steps you could take to reduce your possibility of being targeted to minimum:

Till next time. We hope you enjoy LinkedIn 😉 .